“The symbol of the Organisation is the Harmony of Religions, the Unity of all Faiths, the Acceptance of all Approaches.”
– Divine Discourse, Madras, 23 December 1971

The emblem of the Organisation is known as the ‘Sarva Dharma Logo’ which represents the unity of all faiths and progressions to spiritual realization. It enshrines, in the five semicircles around the centre circle, the symbols of five major religions of the mankind. 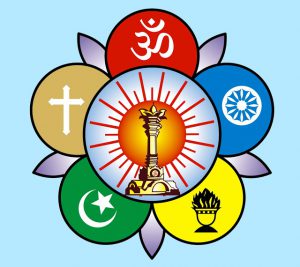 Significance of the Stupa in the centre
Inside the main circle, in the centre is the “stupa” (pillar) with concentric rings holding a lotus flower on its top on which is the illuminating flame. The pillar represents Yoga, with a number of rings to indicate the stages of Yogic Sadhana. This Yoga leads to the unfolding of the Lotus of the Heart, whose petals are borne on top of the pillar. The next stage of this consummation of Bhakthi and the blossoming of the Heart is the Flame of Jnana, the Illumination, the Jyothi, which is symbolised as the finale of the Sthambha (pillar). The Yoga fructifies and takes the sadhaka (spiritual aspirant) on from one height to another, until the Lotus of the Heart blooms and the Effulgence of Illumination is vouchsafed at last.

Significance of religious symbols
The significance of the sacred symbols of various religions have been explained by Baba so that we can understand the truth that all religions lead man on the path to the same God.

Hinduism
“Listen to the primeval Pranava ‘AUM’ resounding in your heart as well as in the heart of the universe.”

Buddhism
“Remember the wheel of cause and consequence, of deed and destiny and the wheel of Dharma that guides them all.”

Zorastrianism
“Offer all bitterness in the sacred fire and emerge grand, great and godly.”

Islam
“Be like the star which never wavers from the crescent, but is fixed in steady faith.”

Christianity
“Cut the ‘I’ feeling clean across and let our ego die on the cross, to endow on you eternity.”

Sri Sathya Sai Baba proclaimed, “I have come not to disturb or destroy any faith, but to confirm each in his own faith – so that the Christian becomes a better Christian, the Muslim, a better Muslim, and the Hindu, a better Hindu.” He has constantly reminded mankind about the unity of all faiths. The following excerpts from His discourses are panacea for the all problems for mankind today.

“I have come to light the lamp of love in your hearts, to see that it shines day by day with added lustre. I have not come to speak on behalf of any particular dharma (righteousness), like the Hindhu Dharma. I have not come on any mission of publicity for any sect or creed or cause; nor have I come to collect followers for any doctrine. I have no plan to attract disciples or devotees into My fold or any fold. I have come to tell you of this Universal unitary faith,
this Aathmic principle, this path
of love, this dharma of prema,
this duty of love, this
obligation to love.”

“All religions teach one basic discipline – the removal of the blemish of egoism from the mind, and of running after trivial joys. Every religion teaches man to fill his being with the Glory of God, and evict the pettiness of conceit. It trains him in methods of detachment and discrimination, so that he may aim high and attain liberation. Believe that all hearts are motivated by the one God; that all faiths glorify Him alone; that all names in all languages and all forms man can conceive denote the one Supreme Being; His adoration is best done by means of love.”

“Let the different faiths exist, let them flourish; let the glory of God be sung in all languages in a variety of tunes. That should be the ideal. Respect the differences between the faiths and recognize them as valid so far as they do not extinguish the flame of unity.”
“All religions, all faiths are but phases or facets of the same Universal Faith and Discipline. It is like the story where seven blind men who examined the elephant and described it to others. The man who held the tail in his hand said it was a snake; the man who felt the leg said it was a pillar; the man who examined only the ear swore that the elephant was like a winnowing basket. This story has a deep inner meaning. The Atma (spirit) is one, but, each one sees a fraction of it and judges it differently, while it is the integrated sum of each of these facets that constitute Reality.”

“Embodiments of the Divine! Having come here, there is only one thing which is most vital for all of you to recognise and understand. Forgetting all differences of race, religion, caste and creed, disregarding considerations of class and community, you must feel that all of you are children of one God.

When you recognise this oneness, eschew all differences and fill your hearts with love, you will be able to redeem your lives by constantly chanting the name of the Lord. That name will help you accomplish anything. It will fill your life with peace and happiness. It will enable you to rid yourself of likes and dislikes. The supreme quality of man is love. Develop love so that you may get rid of attachments and
aversions. Thereby, you will be sanctifying your lives!”

“All religions have emphasized the same truths in their basic teachings, but very few people try to understand the inner significance of religions. Out of a narrow feeling that one’s own religion is superior and the other faiths are inferior, members of different religions are developing hatred towards members of other faiths and acting like demons. Such narrow attitude should be given up completely. All should develop the awareness that though Names and Forms may differ, the essential truth is one in all religions.”

“Whom the Muslims adore as Allah, the Christians as Jehovah, the Vaishnavas as Phullabjaaksha and the Shaivites as Shambhu, who grants, in answer to their several prayers, health, prosperity and happiness to all, wherever they may be, He, the One God, is the God of all mankind.”

“Should each person live the ideals propounded by the founders of his religion, unaffected by greed or hate, the world will be a happy and peaceful habitation for man. In spiritual terms, all of mankind belongs to one and the same class, race, and religion.”

“The followers of every religion, in their own way and style, call upon the One God who is Omnipresent. It is the same God who confers upon all mankind, health, prosperity, peace and happiness. No religion has a separate God showering Grace upon those who profess to abide by that faith alone!”