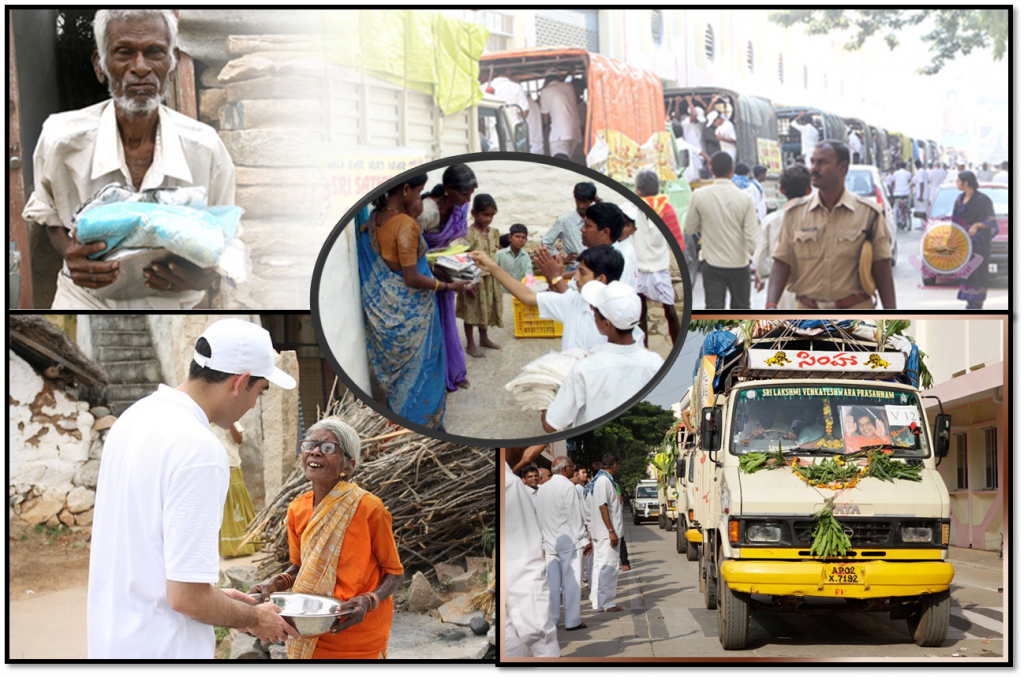 Dusshera or Navaratri, a ten-day festival, which usually falls in the month of October,  is celebrated all over India, in the worship of the Divine as the Mother principle. Bhagawan explains that the festival of Dusshera is, in reality,the celebration of the triumph of good over evil.It also  signifies the slaying of the six demons of lust, anger, attachment, greed, pride and jealously within us. The holy celebrations of Dusshera in Prashanthi Nilayam  include the  Veda Purusha Sapthaha Jnana Yagna,  the Prashanthi Vidwan Mahasabha and the Grama Seva.

Sri Sathya Sai Grama Seva
Grama Seva (Village Service)  initiated by Baba Himself,during the Dusshera celebrations in the year 2000, is a ritual of self-discovery,while also inculcating the spirit of Brotherhood of man and Fatherhood of God, in  the students of Bhagawan’s school and university wh

o visit the villages of Puttaparthi, Kothacheruvu and Bukkapatman, of Anantapur district to distribute His tokens of love- a saree and a dhoti to the heads of the family and ladoos and rice prasadam, to all the inmates of the house at their doorsteps. Every individual, irrespective of caste,colour and creed, is a recipient of Baba’s Love during this seva activity. Bhagawan once said, “Every house, without fail, should get Prasad and a set of clothes at their doorstep before their lunch time. Bhikshanam deha rakshartham, vasthram sheera nivarnam”.  (food is needed to foster the body while clothes are needed as protection from inclement weather). His command thus, became the driving force of Sri Sathya Sai Gramaseva! Bhagawan’s resolve to go Himself to every doorstep to feed and clothe every poor person is executed by thousands of students from the 3 campuses of Sri Sathya Sai Institute of Higher Learning, at Anantapur, Brindavan  and Prashanthi Nilayam, along with the students of Sri Sathya Sai Higher Secondary School, Prashanthi Nilayam and Messengers of Sai (Sevadal) from Andhra Pradesh.

The two stages of  Gramseva service include:

Preparation and packing of Prasad

The staff of Sri Sathya Sai hospitals, canteens and institutions also participate in this activity.

Three large basements in the Gramaseva shed, are occupied by 600 students of Anantapur  campus and Bangalore Nursing College,who fill the tamarind rice, in packets of dried leaves and newspapers. On an average, around 35000 such packets are packed and prepared for distribution.

As per Sri Sathya Sai Baba’s Will of wanting  His students and staff to experience the joy of giving and serving, thousands of students, visit 600 villages and 5 big towns (with a population of close to 4 lakhs) in 50 vehicles travelling in different directions to distribute the prasad with love, in a very organized manner. Grama seva is conducted during the Dusshera vacations  when all the students stay back to participate enthusiastically in this activity,thereby converting their ‘holidays’ into ‘holy days’! As per Bhagawan Baba’s instructions,all the students who are involved in distribution go around t

he village doing Nagarsankeertan and Vedam chanting before distribution. A notable feature of Grama Seva is the  joyful response of the villagers and the spirit of reverence they exhibit while accepting the prasad. Gram Seva is a unique service wherein Sri Sathya Sai Trust members, staff from educational institutions, hospitals and other utilities and sai messengers(sevadal) join and work together to showcase excellent coordination, cooperation, commitment, dedication, discipline and devotion. While the planning  takes 15 days, the actual execution of the project takes another 15 days. This remarkable speed is basically possible due to the excellent discipline and co-ordination among the teams. Needless to say,Bhagawan Baba’s Presence is felt throughout the project! Ever since the year 2000 when Bhagawan Sri Sathya Sai Baba first introduced the concept of Grama Seva, it has been growing in strength year after year. This is true not only in the Sri Satya Sai University but all over India too, with all the samithis, district and state organizations pitching in wonderfully. Villagers all over India have been touched by His Love. They have seen Him even before seeing Him physically!